Persephone is one of the most well-known of the Greek goddesses. Going by many titles, she is the Queen of the Underworld and the Dead as well as the Goddess of Spring and Nature. Like most origin stories in Greek mythology this one begins with closed door dealings, violence, and trickery. Unbeknownst to Persephone, her father Zeus accepts the request of Hades, the powerful God of the Underworld, for his daughter’s hand in marriage. The event known as the ‘Abduction of Persephone’ details a flower-picking Persephone snatched up by Hades on his golden chariot and carried down into the Underworld to be his queen. Obviously distraught over her daughter’s disappearance, Persephone’s mother Demeter, the Goddess of Harvest and Agriculture, forbids the earth to produce. Hearing the hungry pleas of the people of earth, the gods beseech Zeus to intervene. Hades agrees to let Persephone go but not before he tricks her into the eating the food of the Underworld. All it took was a snack of a few pomegranate seeds. Eating the food of the dead inextricably linked Persephone to the Underworld. The compromise was that Persephone must spend a third of the year with Hades and the rest she could be with her mother Demeter. This is the Greek origin story for the seasons. Spring arrives and the earth flourishes when Persephone returns to her mother. Winter sets upon the land when she returns to the Underworld. Thus, Persephone becomes the dual goddess of life, spring, and vegetation but also of death and destruction.

Persephone would not be a victim; she claimed her role as the Queen of the Dead. Ruling alongside Hades, she was known as the Dread Queen who became a ‘she who must not be named’ figure to the Greeks. Persephone was the mistress of the Erinyes, commonly known as the Furies, who tortured those condemned to Tartarus, the feared dungeon of the Underworld, and who also were dispatched to inflict punishment on those whose curses were invoked the name of their mistress. Persephone is prominently featured in Homer’s Odyssey when Odysseus travels to the Underworld in search of a dead prophet to help him find his way home. Repeatedly referred to as Dread Persephone, she is described as having a grove of tall dark poplars growing rotting fruit which Odysseus must pass through on his way into the Underworld. As the presiders over the oracles of the dead and necromancers, Hades and Persephone make Odysseus provide a blood tribute in order to communicate with the dead. And so on and so forth go the stories of the ‘Awful Queen’ Persephone of the Underworld.

Persephone is a blend of pomegranate and dragon’s blood. The top note of pomegranate is semi-sweet and tart with a balancing and earthy base of dragon’s blood- a potent concoction of cedarwood, orange, and patchouli. This full-bodied aroma features forbidden fruit and a spicy, earthy boldness that is befitting Dread Persephone, the wife of Hades, and Queen of the Underworld.

Siren is another scent inspired by Greek mythology. You may also be interested in the fragrance Underworld which is inspired by the ancient Egyptian afterlife.

I first bought Persephone over a year ago and it's remained one of my favorite candles to burn while I work! Ships quickly and arrives safely, thank you! 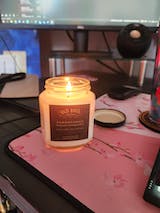 A
Anonymous
Love it

I adore Mother of Dragons, so I'm aware I'm biased towards that one. What could improve upon that scent? Yet there are people who might find that a bit too intense and would appreciate the sweetness of the pomegranate to complement the dragon's blood. This candle is for you.

I got the 4 oz size to try Persephone, and while I still loved MoD more, I found myself returning to Persephone over and over--enough that I bought a larger size for later. It's definitely a complex and intriguing scent.

Persephone's scent combination of pomegranate and dragon's blood makes for an unusual and slightly heady experience. I love the sweet tartness of the pomegranate perfectly balanced with the spicy incense of the dragon's blood resin. I can imagine smelling this in a fairytale witch's kitchen or the tent of a fortune teller at a midnight carnival. Harmony's candles are portals to other, magical worlds. I can't wait to explore more of her worlds! Thanks so much for all the extra little goodies in my first package. Your customer service is outstanding!