Going by many titles, Persephone is the Queen of the Underworld and the Dead as well as the Goddess of Spring and Nature. One day while picking flowers in a beautiful meadow Persephone was abducted by Hades on his golden chariot and carried down into the Underworld to be his queen.

Persephone’s mother Demeter, the Goddess of Harvest, was so distraught she prohibited the earth from producing any crops. The pleas of the hungry forced Zeus to intervene and Hades agreed to let Persephone go. But first, he tricked her into eating the food of the Underworld. All it took was a few pomegranate seeds and Persephone was forever tied to the land of the dead.

The compromise was that Persephone must spend a third of the year with Hades and the rest she could be with her mother Demeter. This is the Greek origin story for the seasons. When Persephone returns to her mother spring arrives and the earth flourishes. Winter sets upon the land when she returns to the Underworld. Thus, Persephone becomes the dual goddess of life, spring, and vegetation but also of death and destruction.

Persephone grew into her role as the Queen of the Underworld. The Greek myths say she ruled alongside Hades overseeing the land of the dead. 'Dread Persephone' is prominently featured in Homer’s Odyssey when Odysseus travels to the Underworld in search of a dead prophet to help him find his way home.

Pomegranate: Pomegranate takes the center stage in this fragrance with its sweet and tart top note.

Dragon's Blood: Dragon's blood, a blend of cedarwood, orange, and patchouli, gives this fragrance an earthy base.

This full-bodied aroma features forbidden fruit and a spicy, earthy boldness that is befitting Dread Persephone, the wife of Hades, and Queen of the Underworld.

You can purchase Persephone here 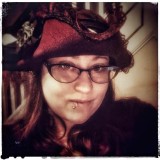